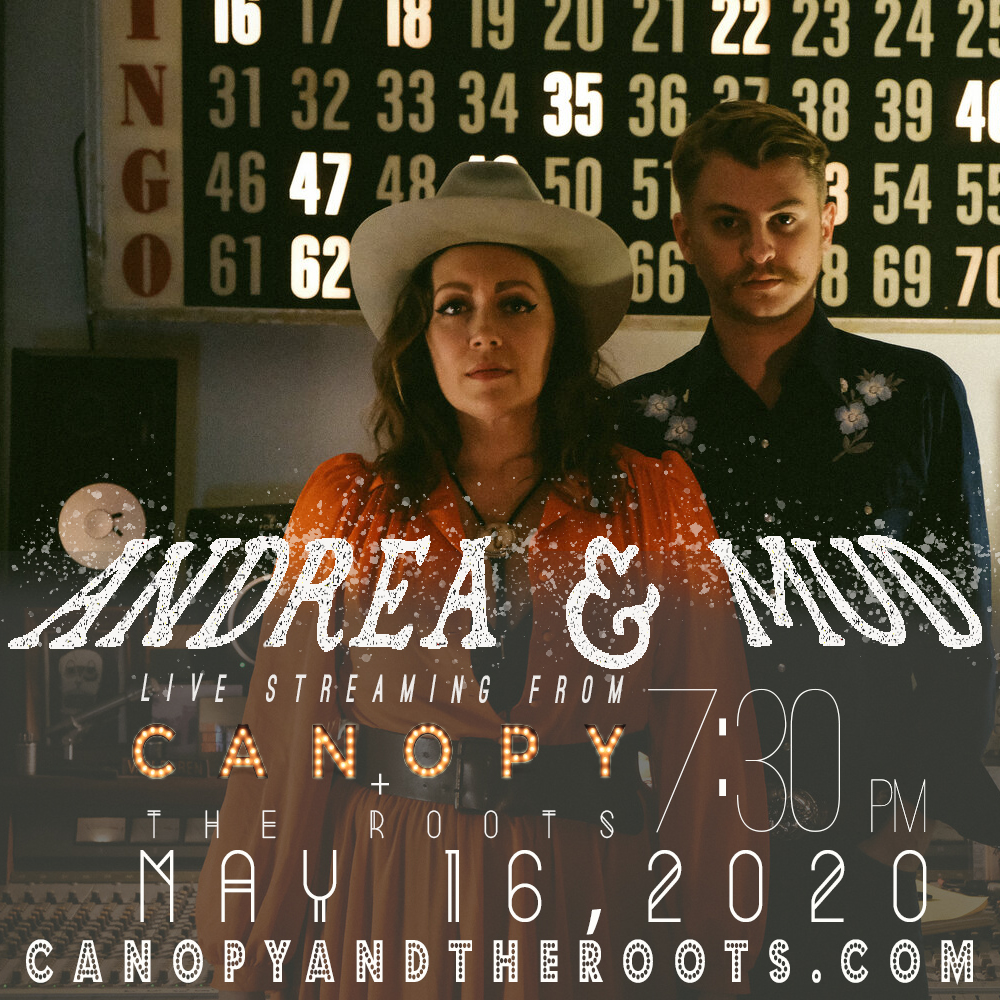 “Andrea Colburn and Mud Moseley write music that bridges the space between old time country and contemporary issues.  Andrea and Mud have a homegrown charm that’s a little Johnny and June, and a little Sid and Nancy.”

Donate via Venmo to stand in solidarity with both artist and venue. @andreaandmud @canopyandtheroots

Surf-western music is a vigorous elixir – blending spaghetti westerns with rough-edged, honky-tonkin’ classic country. Atlanta-based duo Andrea & Mud draw upon genre stalwart Junior Brown, who coined the “surf-western” term, into their own special mix, tossing in heartier blues stock ala Shovels & Rope. Their songwriting is uniquely potent, and with their new album, Bad News Darlin’, they extract parts of themselves to cope, mend, observe, and grow.
Consummate storytellers, Andrea Colburn and Kyle “Mud” Moseley bury their instruments and melodies in the earth’s dusty shell. Each song is soaked in style, immersive and heightened like a Quentin Tarantino soundtrack 一 think Kill Bill or Once Upon a Time in… Hollywood.  The duo co-produced the record with Damon Moon at Standard Electric Records in Decatur, Georgia, and the roster of musicians is impressive. Players include Tre “Danger” Watts (upright bass), Adam Higgins (electric bass, organ), Will Derr (drums), Bradley Daugherty (drums), “Smoking” Brett Resnick (pedal steel), Liz Sloan (fiddle), Chad Paulin (trumpet), Jim Ivy (saxophone), and Matt’s Blues (Matt Jordan on piano).
These 11 tracks are ragged, transportative, and electric. “Birmingham, AL 8:30 AM” is a bluesy, late-night swiller, as they tie together a real-life story about a debaucherous night in the Yellowhammer state that carried on well after sunrise. Then, a song like the boot-scootin’ “Used Car Salesman” depicts a tale about a greasy, sleazy salesman and his hooker. With “I Ain’t Home,” they bite off their most straight-arrow country tune, a thick pluck reminiscent of Loretta Lynn with a smooth Conway Twitty charm.
Together, Andrea & Mud are a match made in heaven, their stories forever intertwined. Separately, their backstories could not be more different.
Growing up in St. Louis, Colburn wanted to play guitar, so her mother bought her one 一 but she “never learned very well,” she admits. During her youth, she largely gravitated to classic rock and blues music and musicians like Robert Johnson, the Black Keys, and Led Zeppelin. When she moved to Georgia in 2012, a shift happened. She connected with members of Rolling Nowhere and the Deslondes, and a new path opened before her. She grabbed her guitar, sat on a stool, and performed open mics around town.
Still unsure of her talents, she sought out and surrounded herself with “people who really wanted to play with me,” she says, “really talented friends.” A spark had been ignited, and there was no extinguishing it. Colburn released her solo debut Sad Songs & Switchblades in 2015.
Meanwhile, Moseley always had a knack for playing. His father collected guitars, and he’d always pick one up and “make a bunch of noise.”  “I was always the one to bring a guitar to the bonfire where everyone is getting drunk,” he says. He later went to college to major in art with an emphasis in ceramics, trodding out to open mic nights often caked in clay. The nickname “Mud” was born, and it stuck.
Moseley and Colburn met in 2016 at Atlanta’s beloved Star Bar during a Legendary Shack Shakers show. They struck up an instant connection, and in the coming months, Colburn was “begging Kyle to come play with me,” she says. “He came over and played ‘Dark River’ for me.”
And the rest is history.
The two not only connected musically but personally, as well. Following their muse, they took a leap of faith and dove headfirst into a full-time music career. “We knew that was the only way to really do it. I know how it goes when people do music and still have a day job,” considers Colburn, “and it’s just so hard to ever really throw yourself into it or get anywhere. We were just balls-to-the-wall in music since then.”
Now residing on family-owned property in Waleska, Georgia, Andrea & Mud are gearing up for their second full-length album, a follow-up to 2018’s Easy, Sleazy and Greazy. They have once again tapped producer Damon Moon, who, as Colburn puts it, “brings something we don’t even know that we need. We’re happy with him. We’ll probably stick with him for a while.”
Bad News Darlin’ slathers on surf-western sensibilities, owed to the format’s long history, but Colburn and Moseley doll it up with their own signature vocal bravado and musical sparkle. “We thought it would be an interesting mix,” MosEley says. “It’s also a really cool vibe. Surf music is like shag music.”
“Hellhounds” is deeply devilish and references a story Colburn once heard about Memphis Minnie and Muddy Waters. “They played in a guitar competition, and the winner got a bottle of gin,” notes Colburn. “She was the winner. She’s a total badass.” In the next track, “The Reason Why She Cries” springs from their fingertips, as they draw upon John Cephas as a distinct reference point and pepper in Bakersfield sizzle and a Merle Travis nod.
Andrea & Mud’s Bad News Darlin’ is a true melting pot. Their style harkens to the classics but remains contemporary and fresh, running the gamut between rock, blues, country, and surf-western. They entice you with their mesmerizing musicality, and you stay for the moving heart-felt stories.