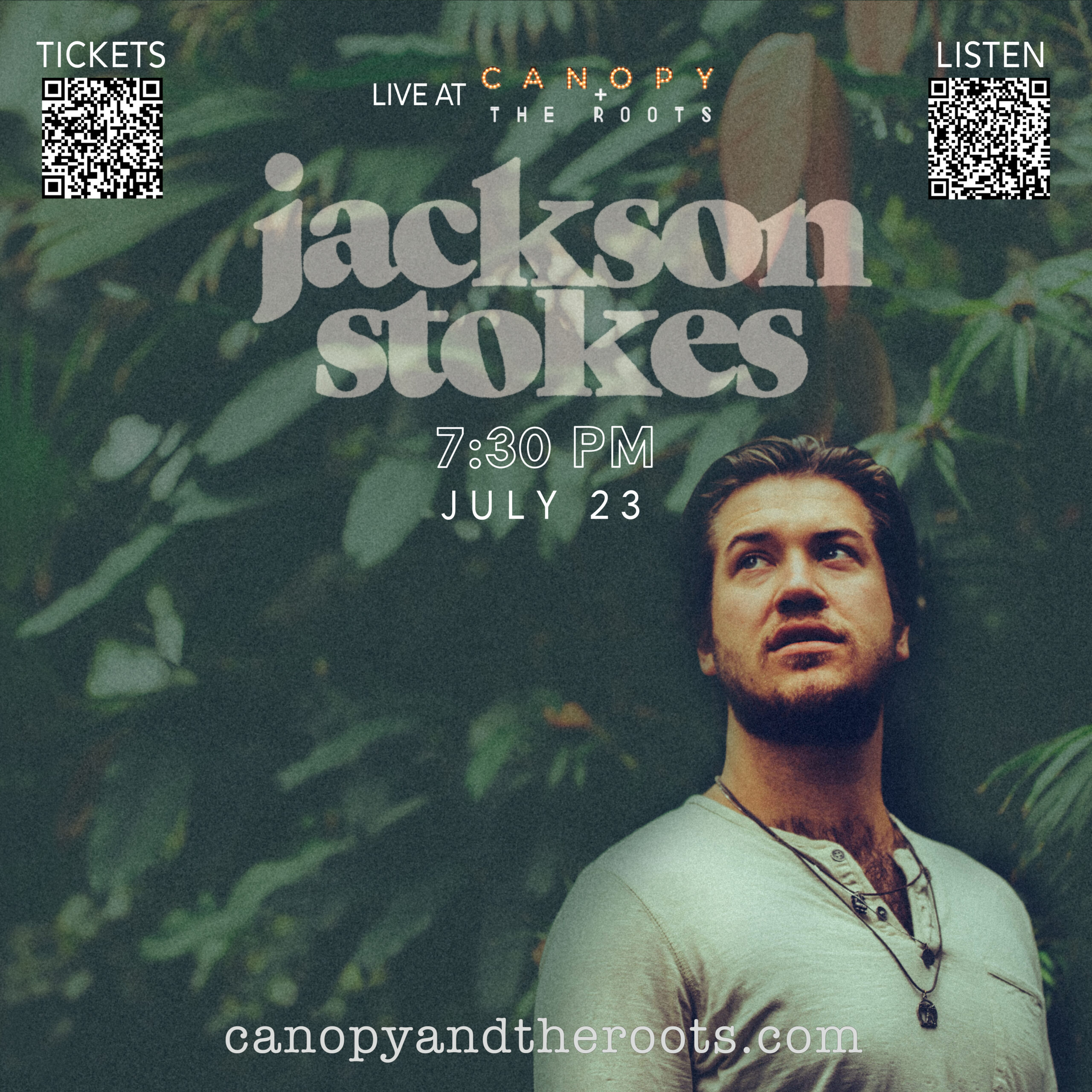 Connect authentically to the artists by hearing them in our “speakeasy”-styled intimate listening room, the Roots, located underground beneath the Canopy social house. Hear the stories behind the songs as the artist(s) share their inspiration and even their heartaches. Doors open at 7:00pm; show starts at 7:30pm; VIP lounge with couches, booths, and tables are available to add-on in-store. Locally-sourced craft beer and wine available for purchase.

For guitarist and singer-songwriter Jackson Stokes, great musicians make great neighbors. Even as a youth weaned on classic rock- his first concert was Lynyrd Skynyrd- Stokes was unaware that living across the street from his St. Louis home was guitarist and singer-songwriter Devon Allman. Allman’s family tree is impressive as the son of Gregg Allman and nephew of Duane Allman of Allman Brothers Band fame. Yet, Stokes knew little of the legendary group. Encouraged by his father, and holding his guitar, the 11-year-old Stokes knocked on Allman’s door.

Allman, two decades his elder, heard something special in the young Stokes and encouraged him to continue learning and growing as a musician. Stokes dutifully attended Allman’s Honeytribe rehearsals, sitting quietly in the corner while the group worked up its repertoire. At 14, Stokes had developed into a prodigious firebrand with a passion for the blues, teaming with another area wunderkind, Marquise Knox, and performing his first professional gigs.

By 18, his experience playing in high school garage bands, and with an All-State school jazz band, expanded his rock-and-roll palette. He attended Drury University in Springfield, earning a degree in music therapy, while maintaining a friendship with Allman, who encouraged Stokes to further sharpen his songwriting skill. In Memphis in 2012, Allman produced a five-song EP, Witness, from the Stokes-led band, Delta Sol Revival.

DSR toured regionally until 2016 when Stokes and Allman began discussing recording his solo debut. The pair returned to Memphis for the initial sessions, as Allman invited Stokes to join the Devon Allman Band for 2017, and subsequently the Devon Allman Project for a world tour in 2018. On days-off from the road, Stokes continued work on his album, organically building the full-length.

In May of 2019, Stokes put the finishing touches on a striking inaugural effort. Produced by Allman, it is a lean and focused set of rock-and-soul, including an ambitious Talking Heads cover, and a depth of original material ranging in style and subjects. From the Memphis stroll of the opening “Can’t Getcha Out,” through the reflective acoustic closer, “Take Me Home,” the debut encompasses Stokes’ wide swath of influences and tastes. There’s the ‘60s R&B update that morphs into modern rock on “Slave,” the staggering punches of overdriven guitar on “Time is Now,” and the midnight seduction of “Contents Under Pressure.” A flourish of pleading guitars finishes the slowly climbing blues-rock centerpiece, “You and Your Partner,” while David Byrne meets Southern funky on “Life in Wartime.” As well, Stokes welcomes the sunny-days slide guitar of The Allman Betts Band’s Johnny Stachela to brighten the Southern sway of “Sins Are Forgiven,” complementing that with the chunky Saturday night blues of “Whiskey.”

Naturally, the nine-song record offers plenty of the fiery guitar that has been the calling card of Stokes’ career for this first decade, showcasing the stellar reputation he’s earned sharing the stage with such icons as Robert Cray, The Wailers, and Robert Randolph, as well as Warren Haynes, Lukas Nelson, and Marcus King. Yet, it’s a conspicuous emphasis on Stokes’ escalating songcraft that also shines as brightly on this initial release.